He designs future cityscapes. She dreams of having a family. Can they survive marital strife and New York City’s turmoil to find true love?

Boston 1916. Harold Deal is determined to rise above his humble South Carolina roots. Graduating from MIT with a degree in architecture, the talented young man lands a job with a prestigious Manhattan firm. With a pretty new wife and his mother’s strong guiding hand, he’s convinced he has it all…

From the first time she set eyes on the visionary architect, Mae knew she’d follow Harold to the ends of the earth. But they’d barely spoken their vows when his mother attempts to disrupt their wedded bliss. And Mae fears New York City isn’t far enough away to escape her mother-in-law’s meddling.

Contributing to one project after another for the city’s burgeoning skyline, Harold’s skill in Beaux-Arts style wins him acclaim. But at home, Mae is brokenhearted that, under his mother’s influence, he continually resists her pleas to start a family. And when he’s caught in a deadly bombing at a Wall Street bank, their once-bright future seems forever lost.

Can Harold and Mae overcome tragedy and a domineering in-law to leave a legacy of love?

Looking Through Walls is the absorbing first book in a historical fiction series based on a true story. If you like generational sagas, vivid detail, and dramatic events inspired by real people, then you’ll enjoy Hal Holbrook’s deeply researched novel.

Read Looking Through Walls today to explore relationships in the changing times of the early 1900s. Each of Hal’s series novels can be read as a stand-alone. 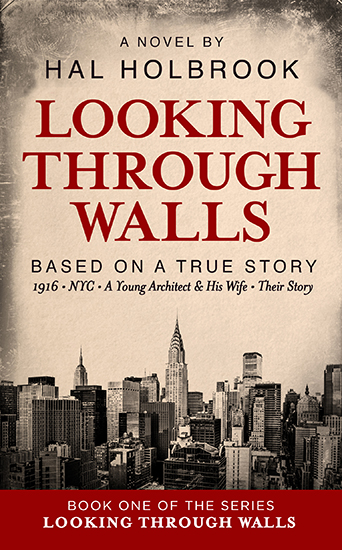